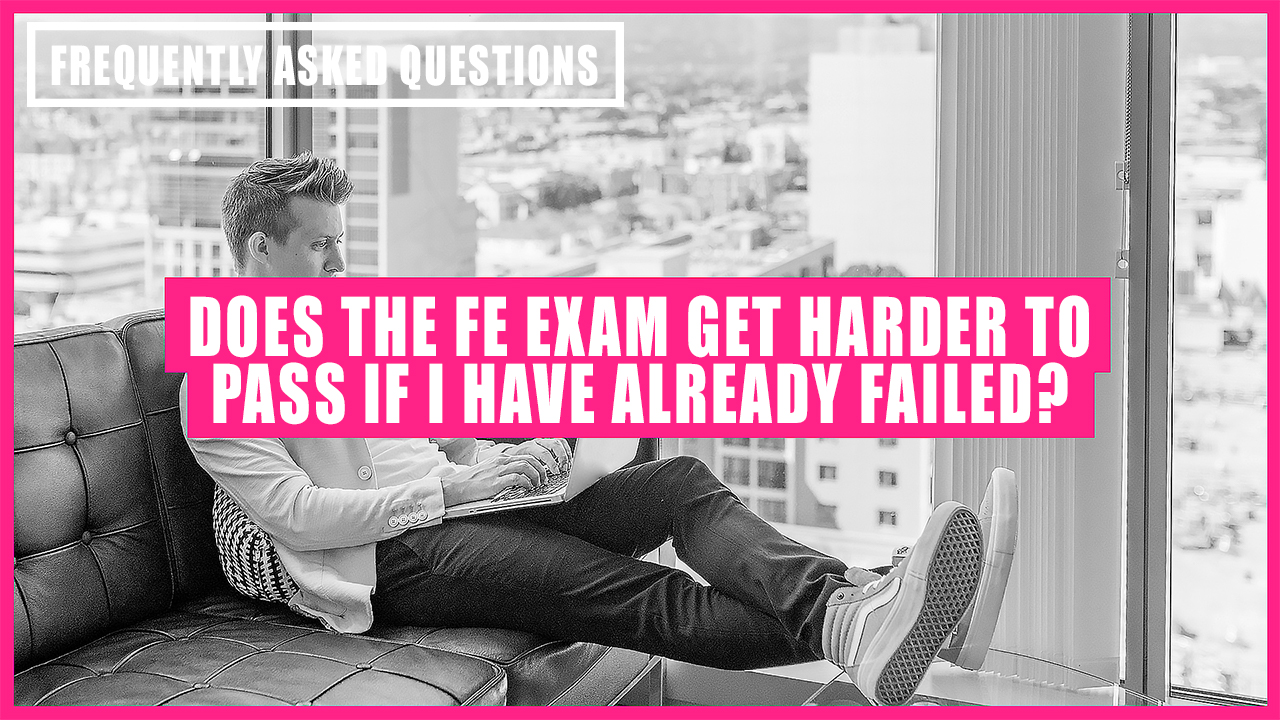 A question we often get coming in from those who are getting back on the horse after failing the FE Exam is this:

Does the FE Exam get harder to pass if I have already failed?

The short answer is No.

But, that isn’t the whole story…it actually CAN become harder and harder to pass the FE Exam for a few key reasons.

Let’s dive in to this from both angles.

The Double Slap to the Face: Failing the FE Exam

Regardless of when you took the exam, or how many times you took the exam, if you have already failed the FE Exam once, or twice…or five times…the exam that you will take on your next attempt is not influenced one iota by your past.

Some feel as if this is the case because they go in and retake the exam and it is seemingly harder than what they experienced previously.

No matter when you take it, or what your past is, the FE Exam will be the exact same had you been in any other situation.

The student sitting to your right may be a first time test taker, but they are taking an exam that is composed in the same exact fashion as the one you are taking.

We have written at length about how the FE Exam is developed and administered, give a minute to catching up on the process here:

How is the FE Exam created?

So the answer, from a material standpoint, is that the exam will be the exact same difficulty level regardless of what your history on the exam is.

From this angle, No, it will not be harder to pass.

So why are you saying that the FE Exam could be harder, what gives?

To flip to the opposite angle, Yes, it is absolutely a possibility that the FE Exam will become harder and harder to pass the more you fail it.

It’s not because the material is becoming harder and harder, its merely a result of a number of different natural shifts that occur when one fails an exam or is away from the material for an extended period of time.

First, the longer you are out of the university, the harder the exam is going to seem, that’s just a fact.

We come hot out of the University dialed on our theoretical knowledge, which is what we are predominantly tested on when it comes to the FE Exam.

Reality is though, we use probably 3.7% of what we actually learn in college when we start to work in the real world.

Alright, so that statistic is completely made up, but you get the point…and if you have graduated college and have been in the real world for any amount of time, you know that this is exactly how it feels.

On another front, the more and more you fail the FE Exam, naturally, you are going to begin to doubt your ability to actually pass it at all.

Where once you were confident that you were set up to succeed and pumped to get after it, now you are questioning your knowledge and effort it will take to get to that point again…if ever.

This shift in mindset can lead to a complex concoction of bad that is setting up to destroy any efforts to the progress you are desiring to gain.

When it comes to success on the FE Exam, you need to have your mindset dialed in and on point or else you are significantly handicapping your chances of performing in your preparations, and ultimately, on the day of your exam.

The reality of it all is this though…what has happened has happened, their is no need to dwell on it any more than you need to.

Yes, take some time to absorb and reflect, but when thats done, winners get back at it and make miracles happen.

Failure is part of life.

I personally fail every single day, but it’s not final unless you let it be.

It’s a part of the growth process, and if you get back up on that saddle, you will come out of it strong, not only from a professional standpoint, but from a personal standpoint.

Success comes down to a simple decision to believe.

To believe when the odds seem to be stacked against you.

Once you believe, anything is possible.

As always, with Love, Prepineer

I’ve missed more than 9000 shots in my career. I’ve lost almost 300 games. 26 times, I’ve been trusted to take the game winning shot and missed. I’ve failed over and over and over again in my life. And that is why I succeed. –  Michael Jordan